Have you heard the news? Genetically modified potatoes are now cleared for commercial use in the U.S. after receiving final approval, the USDA officially announced Friday, November 7th.

A couple of interesting points though, this particular modification is said to only use genes from other potatoes and is not designed to be herbicide and pesticide resistant as many other GMO crops are. It is designed to not bruise, therefore increasing usability in growers yields.

The new potato also promises a decrease in a carcinogen that is said to cause cancer from potatoes that are cooked (think fries) at a high temperature.

Some researchers remain skeptical of the process though, saying it has not been fully vetted as safe.

This seems to always be the point that trips up an industry, having a lack of data showing harm does not make something inherently safe.

What are your thoughts?

Read on for the full article…

A potato genetically engineered to reduce the amounts of a potentially harmful ingredient in French fries and potato chips has been approved for commercial planting, the Department of Agriculture announced on Friday.

The potato’s DNA has been altered so that less of a chemical called acrylamide, which is suspected of causing cancer in people, is produced when the potato is fried.

The biotech tubers were developed by the J. R. Simplot Company, a privately held company based in Boise, Idaho, which was the initial supplier of frozen French fries to McDonald’s in the 1960s and is still a major supplier. The company’s founder, Mr. Simplot, who died in 2008, became a billionaire.

The potato is one of a new wave of genetically modified crops that aim to provide benefits to consumers, not just to farmers as the widely grown biotech crops like herbicide-tolerant soybeans and corn do. The nonbruising aspect of the potato is similar to that of genetically engineered nonbrowning apples, developed by Okanagan Specialty Fruits, which are awaiting regulatory approval. 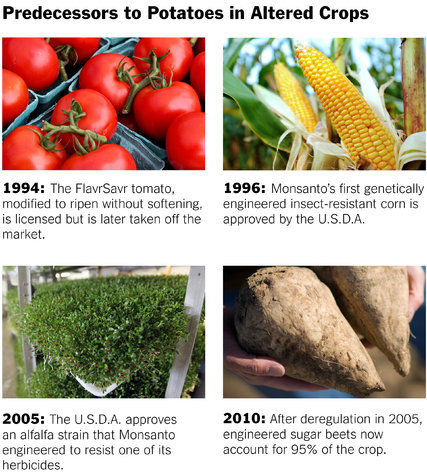 But the approval comes as some consumers are questioning the safety of genetically engineered crops and demanding that the foods made from them be labeled. Ballot initiatives calling for labeling were rejected by voters in Oregon and Colorado this week, after food and seed companies poured millions of dollars into campaigns to defeat the measures.

The question now is whether the potatoes — which come in the Russet Burbank, Ranger Russet and Atlantic varieties — will be adopted by food companies and restaurant chains. At least one group opposed to such crops has already pressed McDonald’s to reject them.

Genetically modified potatoes failed once before. In the late 1990s, Monsanto began selling potatoes genetically engineered to resist the Colorado potato beetle. But the market collapsed after big potato users, fearing consumer resistance, told farmers not to grow them. Simplot itself, after hearing from its fast-food chain customers, instructed its farmers to stop growing the Monsanto potatoes.

This time around could be different, however, because the potato promises at least potential health benefits to consumers. And unlike Monsanto, Simplot is a long-established power in the potato business and presumably has been clearing the way for acceptance of the product from its customers.

Simplot hopes the way the potato was engineered will also help assuage consumer fears. The company calls its product the Innate potato because it does not contain genes from other species like bacteria, as do many biotech crops.

Rather, it contains fragments of potato DNA that act to silence four of the potatoes’ own genes involved in the production of certain enzymes. Future crops — the company has already applied for approval of a potato resistant to late blight, the cause of the Irish potato famine — will also have genes from wild potatoes.

That is not likely to persuade groups opposed to such crops, who say altering levels of plant enzymes might have unexpected effects.

Doug Gurian-Sherman, a plant pathologist and senior scientist at the Center for Food Safety, an advocacy group, said that the technique used to silence the genes, called RNA interference, was still not well understood.

“We think this is a really premature approval of a technology that is not being adequately regulated,” he said, adding that his group might try to get a court to reverse the approval of the potato. 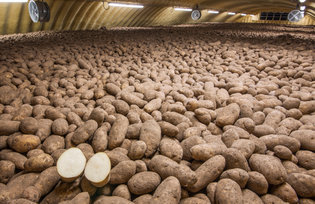 He said one of the substances being suppressed in the Innate potatoes appeared to be important for proper use of nitrogen by the plant and also for protection from pests.

The Agriculture Department, in its assessment, said the levels of various nutrients in the potatoes were in the normal range, except for the substances targeted by the genetic engineering. Simplot has submitted the potato for a voluntary food safety review by the Food and Drug Administration.

The company says that when the Innate potatoes are fried, the levels of acrylamide are 50 to 75 percent lower than for comparable nonengineered potatoes. It is unclear how much of a benefit that is.

The chemical causes cancer in rodents and is a suspected human carcinogen, though the National Cancer Institute says that scientists do not know with certainty if the levels of the chemical typically found in food are harmful to human health.

Still, Gregory Jaffe, biotechnology project director at the Center for Science in the Public Interest, a consumer group that deals with nutrition issues, welcomed the approval. “We support clearly trying to reduce consumers’ exposure to acrylamide and if this product helps do that, I think it’s a benefit,” he said.

Last year, the F.D.A. issued draft guidance advising the food industry how to reduce levels of acrylamide, which is also found in some baked goods, coffee and other foods. The agency listed numerous steps that could be taken in the growing, handling and cooking of potatoes. Many food companies no doubt have already taken steps to reduce acrylamide levels and might not need the genetically engineered potatoes.

Whether McDonald’s, which did not respond to requests for comment, adopts the potatoes is somewhat academic for at least another couple of years. Simplot anticipates that only a few thousand out of the nation’s more than one million acres of potatoes will be planted with Innate potatoes next year, far too little to serve fast-food chains.

Instead, the company will focus on sales of fresh potatoes and fresh-cut potatoes to supermarkets and food service companies and to potato chip manufacturers, said Doug Cole, a spokesman for Simplot.

The National Potato Council, which represents potato farmers, welcomed the approval, albeit with reservations.

John Keeling, chief executive of the trade group, said growers wanted new technology. But in comments to the Agriculture Department, the group has expressed concern that exports could be disrupted if genetically engineered varieties inadvertently end up in shipments bound for countries that have not approved the potatoes.

China, for instance, recently turned away shipments of corn containing small amounts of a genetically engineered variety developed by Syngenta that it had not approved for import. Some corn farmers and exporters have sued Syngenta for their losses.

Mr. Cole of Simplot said growers would have to keep the genetically engineered potatoes separate from others and out of exports at least for now. The company plans to apply for approval of the potatoes in the major markets, starting with Canada, Mexico, Japan and then other parts of Asia.